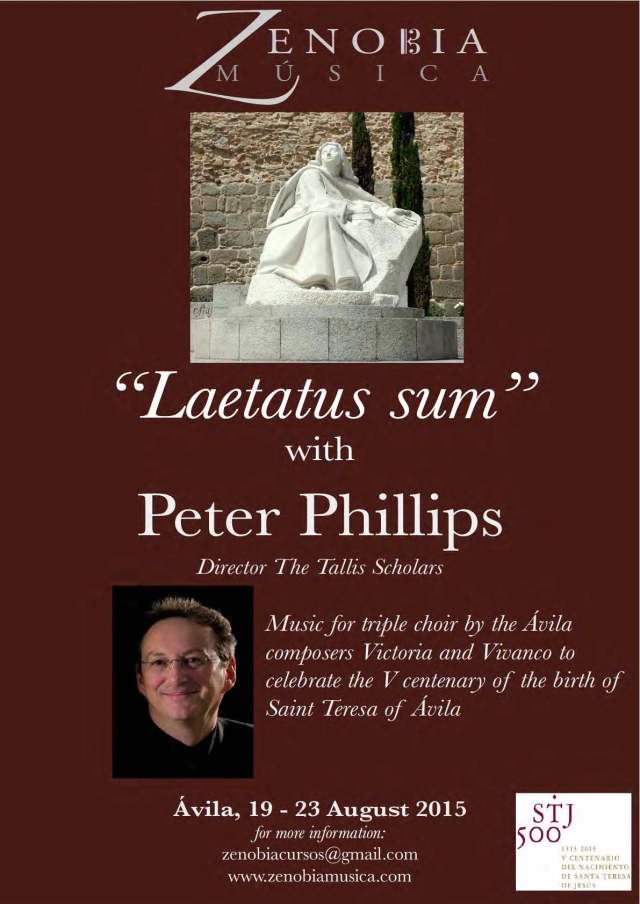 MUSIC FROM THE TIME OF SAINT TERESA:

SEMINAR AND CONCERTS OF THE MUSIC OF TWO OF THE LEADING COMPOSERS FROM AVILA, CONTEMPORARIES OF SAINT TERESA, WITH PETER PHILLIPS, RUPERT DAMERELL AND ALEXANDER CAMPKIN

Organized by Zenobia Música and directed by three British conductors – Peter Phillips, Rupert Damerell and Alexander Campkin –  a Seminar – choral workshop will be held in Ávila on the music of the Avilan composers Sebastián de Vivanco and Tomás Luis de Victoria, contemporaries of Saint Teresa, in the 500th anniversary year of her birth.

Given the technical difficulty of the pieces to be prepared, and time limitations, the objective is to join together in Ávila the best choral singers and conductors. This is a workshop for singers of a high level who will work the repertoire in reduced groups as well as in the whole choir.

There is a limit on the number of places and a selection process to guarantee the quality. Pre-formed groups are also invited to apply.

Victoria and Vivanco were, most probably, choristers in Avila Cathedral together. Vivanco was probably born in 1551 and Victoria in 1548 (the dates of birth are not known exactly) and therefore it is likely that they sang together for a year or two as seises in the cathedral choir. Later in life, both took holy orders and worked as priests, dedicating their lives to the composition of sacred music. Since Saint Teresa was born in 1515, also in Ávila, they surely came into contact with her.

Another curiosity is that during their lifetimes, it was Vivanco who was much better known than Victoria, who spent much of his life outside Spain, but History has swapped these roles. Today it is Victoria who is much more famous, with the music of Vivanco  being perhaps somewhat unjustly neglected in the repertoire of the groups specializing in Spanish renaissance music.

The works to be studied in the Seminar are those pieces composed for triple choir by both composers.

This is, therefore, an unusual project for various reasons:

. Assumes a high technical level (triple choir works), which are not easy to be performed by either amateur choirs, or by professionals, without a high level and resources.

. Brings together the work of two Avila composers, contmpories of each other and of Saint Teresa, which allows the comparison of their triple choir works, knowing that Victoria was studying and working in Rome for twenty years, subject to the influence of the Italian composers of the time, whilst Vivanco always stayed in Spain.

. Offers the possibility to work on these pieces and also perform them in the same city where both composers spent their childhood years and received their initial musical training.

. Enables high-level choral singers to work with one of the most globally renowned specialists in renaissance choral music as is Peter Phillips and with a specialist in the interpretation of Victoria as is Rupert Damerell.

. There will also be a third British director, the young award-winning composer and choir director Alexander Campkin, who will work with the reduced groups of singers.

The seminar will begin with Rupert Damerell and Alexander Campkin, with Peter Phillips joining on 21 August.

The seminar will have approximately 30 teaching hours. 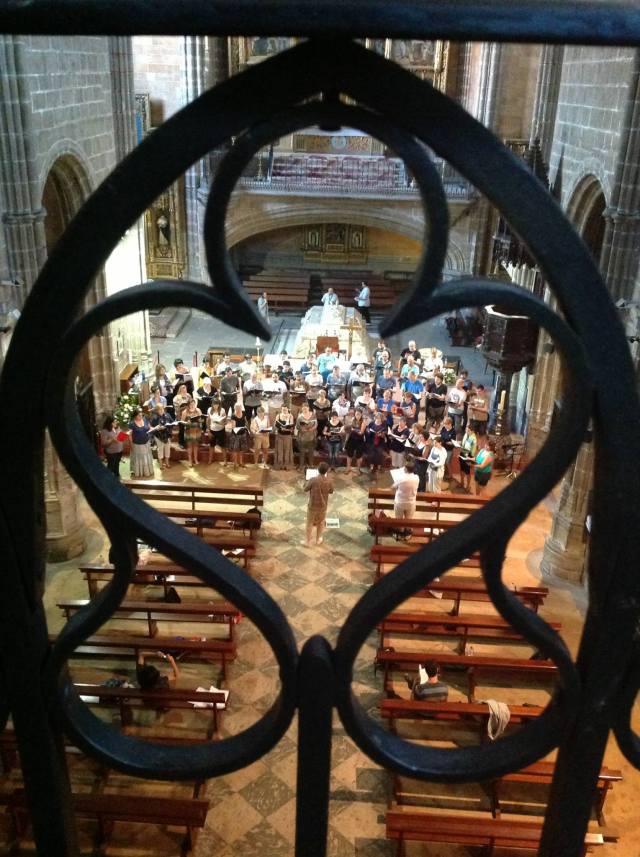 The works to be studied are the following:

Music for triple choir by Victoria and Vivanco

There are two modes of registration and matriculation:

. CHOIR MEMBER. Participant as a choir member. Take part in the rehearsal sessions and sing in the concerts.

The seminar will have a cost of 180 euros for choir members. For non-singers, the fee will be 50 euros.

The amount of the course fee includes the attendance of the seminar and concerts, and scores in digital format.

The seminar will have approximately 30 hours of rehearsal time, in addition to the final concerts. Those participants who attend over 80% of the sessions will receive a diploma at the end of the course.

The course will be held in English and Spanish, with translators on hand.

. Sending of scores. Once an application has been accepted, scores will be sent digitally forthwith. 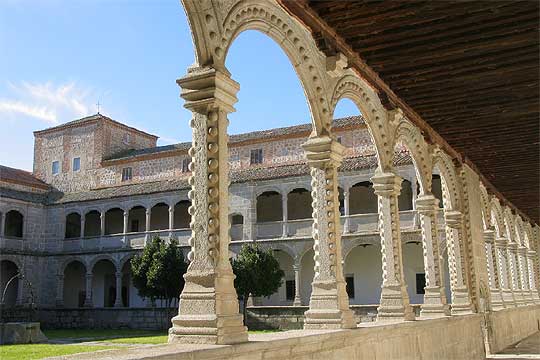 The course will be held in Ávila, in the Real Monasterio de Santo Tomás.

There is lodging with full board in the Monastery residence for those course members who wish it. The grounds have fine gardens and shady areas also to enjoy in family if you would like to come accompanied. In addition, it is very close to the centre of the city, with the historic and cultural heritage that this city enjoys.

The participants do not have to reserve the lodging in the monastery directly, in the case of staying there. The organisation of the course already has a block booking of rooms to allocate to the students who would like them.

Ávila also boasts a wide selection of hotels and other accommodation for those who do not wish to stay in the monastery.

For more information about the monastery residence see: 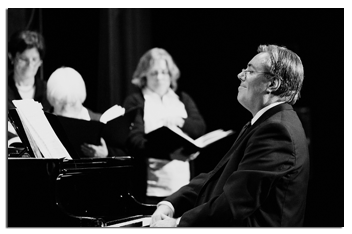 Rupert Damerell began his musical career as a chorister in the choir of St George’s Chapel, Windsor Castle, where he also started playing the organ, aged 10. He later studied violin at the Julliard School of New York, playing in the National Youth Orchestra of Great Britian. He went on to be a choral scholar at King’s College, Cambridge, where he studied musicology.

He has sung and played in many of the important choral institutions in London, such as Westminster Abbey, Westminster Cathedral, St Paul’s Cathedral, Brompton Oratory etc. Resident in Madrid since 2001, he has sung with various early music groups all over Europe, including Huelgas Ensemble, Opera Fuoco, Theatre de Champs Elysées, Los Musicos de su Alteza, Proyecto Guerrero, Ars Combinatoria and Capilla Príncipe de Viana. He gives frequent organ recitals, and is in demand in the Madrid area as a freelance choral accompanist and continuo player, on harpsichord, piano and organ. He frequently gives courses on early music performance, joining forces with directors such as Peter Phillips, Erik van Nevel , Michael Noone or Stephen Layton.

Currently he is director of Zenobia Consort (which toured London and Cambridge in 2014 with a Victoria programme and will sing in Rome in December 2014, including events at St Peter’s Basilica and Santa Maria Maggiore ), symphonic chorus Coro EOI and of the Escolanía and Coro of Colegio Sagrado Corazón de Chamartín in Madrid, and is organist-cantor of the church of Espiritu Santo y Nuestra Señora de la Araucana (Madrid). 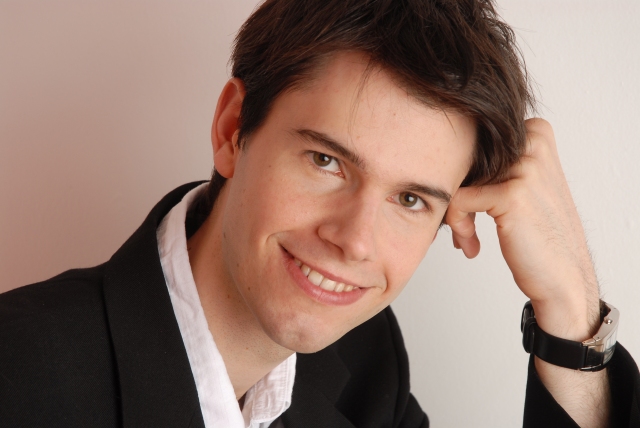 Alexander Campkin is a young British composer and conductor. His work has been performed or broadcast in over thirty countries. Alexander has received over forty commissions from organisations including the Royal Opera House, the BBC Performing Arts Fund and the Swedish Arts Council. He has been appointed Composer in Residence of Ampersandance Contemporary Dance Company, The Fulham Camerata Choir and Orchestra, The Fourth Choir and Neresheim Abbey in Germany. He features on 14 CDs, one of which was Classic FM Christmas CD of the Year. Alexander is conductor of The Oxbridge Singers, minimaLIST ENsemble and Artistic Director of Future Opera. He studied at Oxford University, the Royal Academy of Music and the University for Performing Arts in Vienna.